Located in the heart of the Valle d’Itria, the origin of its name has been the subject of numerous studies. The first name derives from the Latin “Sylva Arboris Belli”, which means “the forest of the war tree” with reference to the period in which the area was covered by

luxuriant vegetation. Later it passed to the name “Silva Arborelli” as it results from the investiture diploma of 15 May 1481 of King Ferrante of Aragon. With this document the possessions of Count Giuliantonio I were assigned to his son Andrea Matteo.

The counts authorized the settlers to build the dry dwellings, so that they could be destroyed in the case of royal inspection, since the birth of an urban area required the payment of the tax according to the ‘Prammatica de Baronibus’, then with this trick the tribute was prevented.

It was the year 1797 and a group of brave Alberobellesi, tired of the precarious condition, went to Taranto to ask for help to King Ferdinand IV of Bourbon who listened to them and on May 27, 1797 he sent the Decree with which the small village became free. On 22 June 1797 Alberobello became the official name for decision of the inhabitants.

In 1940, with the outbreak of the Second World War, the Masseria Gigante, which had been built in 1887 in the wilderness area by the priest and brigand don Francesco Gigante with the intention of creating a field for the school of agricultural practice, was requisite by the Italian government that used it as a transit and internment camp and remained there for another three years. 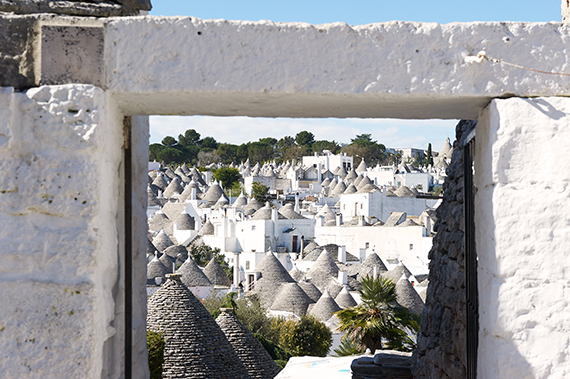 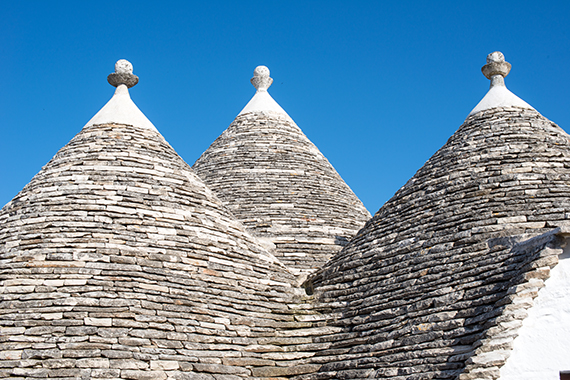 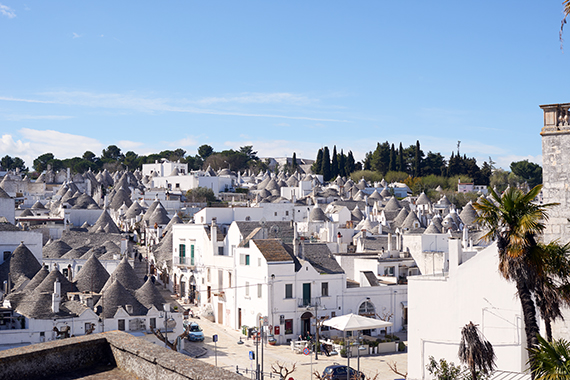 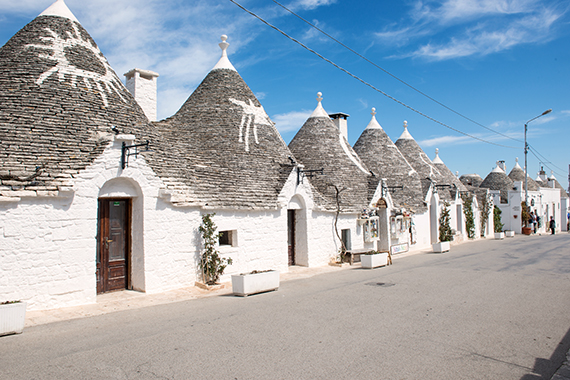 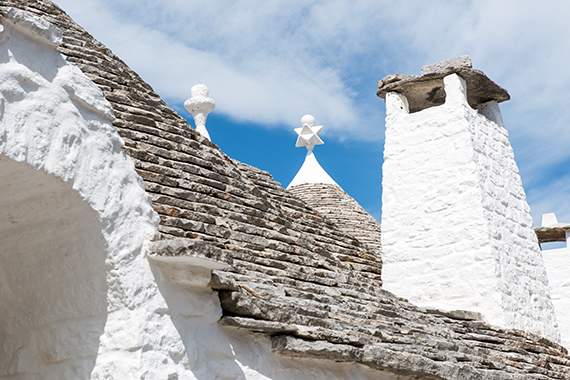 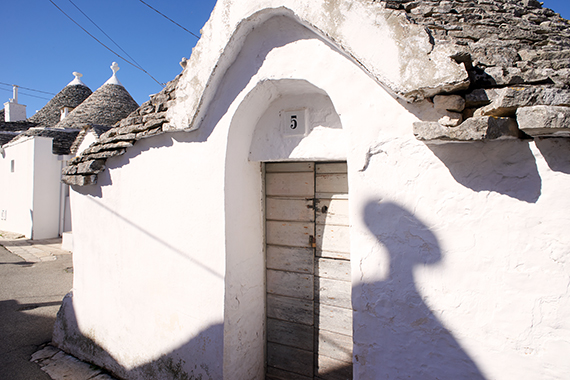 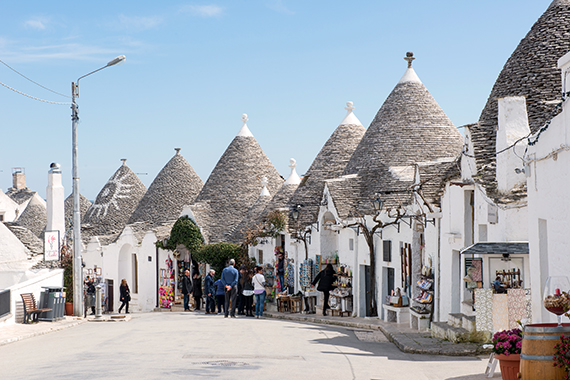 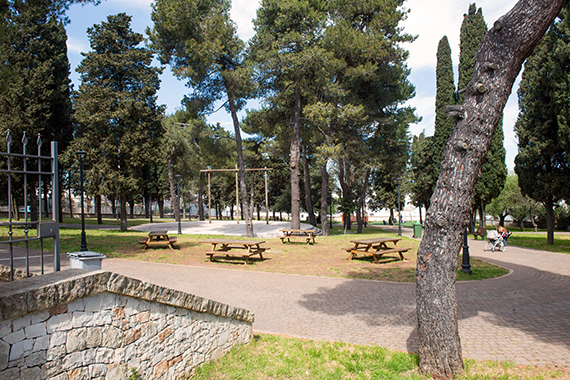 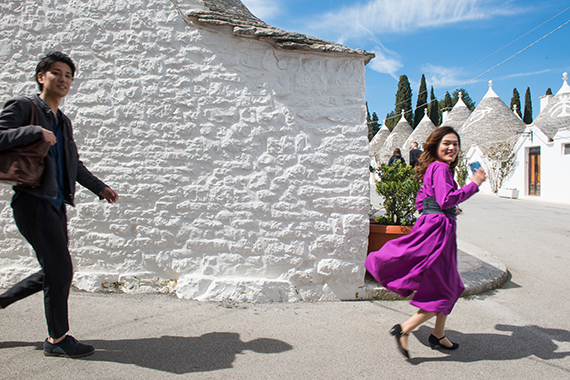 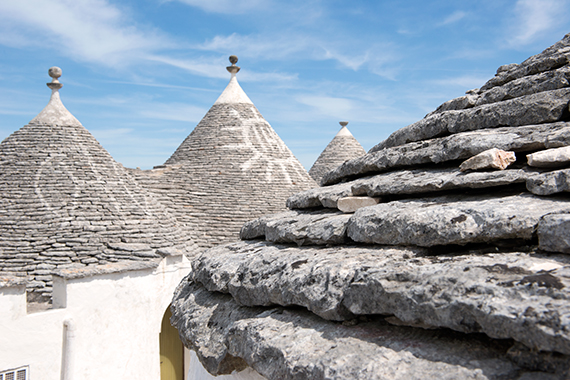 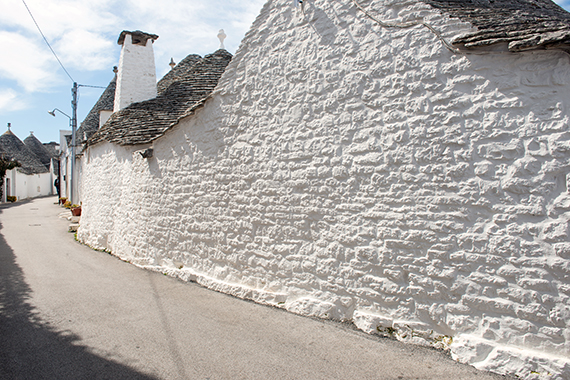 This use continued even after the war until 1949. From 1957 to 1972, the masseria was used as a juvenile rehabilitation school. Inside there is a small church dedicated to St. Francis of Assisi and St. Clare of Assisi with plaster paintings of 1948.

Alberobello is the only inhabited center in which there is an entire district of trulli. It is therefore considered cultural capital of the trulli of the Valle d’Itria.

The famous trullo dwellings are dominated by the external use of stone on the threshold, the ‘chiancole’, which cover the cone and create our wonderful urban center, unique in the world, now recognized by UNESCO as a World Heritage Site.

In the northern part of Alberobello, behind the Church of the Santi Medici Cosma e Damiano, the Trullo Sovrano is the only existing example of a two-story trullo (conical drystone hut).

It was built in the first half of the 18th century by the family of Father Cataldo Perta, who used it as his private home, whilst his employees lived in the surrounding trulli. It owes its name to the historian Notarnicola who called it “Sovrano” (“Sovereign”), to highlight its grandeur in comparison to all the other trulli.

The trullo, with its authentic interior furnishings and original objects, was declared a National Monument in 1923 and has been on UNESCO’s list of World Heritage Sites since 1996.

Since its construction in the 18th century, the Trullo Sovrano has been used as an apothecary shop, a coenobitic community and a rural oratory. In 1785, it housed the relics of Saints Cosmas and Damian, which Don Cataldo himself had brought from Rome, while from 1823 to 1837 it served as an oratory for the Confraternity of the Holy Sacrament.

The sacred place, built in fourteen months between 1926 and 1927, shows the signs of the strong popular devotion of the inhabitants of Alberobello.
Created by the master of art Martino De Leonardis in limestone and built with the typical technique of the trulli (which reproduces the conical vault), this church is proposed as a linking and mediation between past and present, ancient and modern.

The imposing tripartite facade is dominated by a rose window and three tympanums with hanging arches, which recall the decorations of the Apulian Romanesque churches. On the right side there is a high bell tower and on the left the seminary, now a tourist accommodation.

The interior is a single room, with a Greek cross plan surmounted by a dome 20 meters high. The major apse was entirely frescoed in the twentieth century with the representation of the Tree of Life, enriched by the majestic Crucifix by the master Adolfo Rollo.

Made up by a concentration of adjacent and connecting trulli, which during the 18th century used to belong to Giacomo Pezzolla, personal doctor of count Giulio Antonio Acquaviva di Aragona this complex is still also called “Casa Pezzolla”.

Today the museum represents an historical-educational documentation area, equipped with modern information back-up systems for the show-pieces, but it is also an exhibition and creative area which aims at joining the past with the present hosting temporary exhibitions.

The name of the house comes from the surname of its owner Francesco d’Amore, who took part in the insurrection of Alberobello against the feudal tyranny during the 18th century. The house, as a sign of victory, was erected in front of the Count’ palace, using materials which were forbidden up until that time: lime and mortar.

The first stone was laid on 1st August 1797, a few months after the promulgation of the Royal Decree (27th May 1797) which allowed the locals to build using timber without being forced to “dry-build” and also no longer be subjected to the vassalage of the Counts Acquaviva di Conversano.

For some time the building was home to the Town Hall.
The Casa d’Amore, because of its historical importance, was declared national monument in 1930.