Matera is one of the oldest cities in the world whose territory holds evidence of human settlements from the Paleolithic. Over the millennia man has been able to adapt well to this incredible territory, without spoiling it. The labyrinthine intrico of streets,

caves dug in the belly of the earth and rock churches dates back to 9000 years ago. Also known as the “Città dei Sassi” and “Città Sotterranea”, its original urban nucleus has developed from natural caves carved into the rock and subsequently modeled into increasingly complex structures within two large natural amphitheaters: the Sasso Caveoso and the Sasso Barisano.

According to some hypotheses, Matera was formerly called Mataia ole from the Greeks, which derives from Mataio olos, whose meaning is “completely empty”, with reference to the Gravina, a ditch crossed by torrents; further hypothesis is that the name derives from Mata (pile of rocks), root used for different geographical names.

Born on a prehistoric entrenched village, it has probable Greek origins. This would be confirmed by the emblem of the city, the ox with the ears of wheat, which according to some scholars is a typical symbol of Magna Graecia;
In 664 d.C. Matera passed under the Longobard domination and was annexed to the Duchy of Benevento. The 9th and 10th centuries were characterized by bitter struggles between the Lombards themselves, the Saracens and the Byzantines, who tried several times to seize the territory; the city was destroyed by the troops of Ludwig II, emperor of the Franks, in an attempt to drive out the Saracens.

Starting from the 8th century, the territory of Matera was the scene of a notable immigration of Benedictine and Byzantine monks, who settled along the caves of the Gravina transforming them into rock churches. After the Norman settlement took place in 1043, the city experienced a period of peace. In 1663 it was separated from the province of Terra d’Otranto, which it had belonged to for centuries, to become, until 1806, the capital of Basilicata in the Kingdom of Naples. During this period the city experienced significant economic, commercial and cultural growth.

In 1993 UNESCO declared the Sassi di Matera a World Heritage Site
The Sassi of Matera are the 6th site in Italy in chronological order, the first in the south. On the occasion of this inscription, for the first time UNESCO uses in its criteria and motivations the concept of Cultural Landscape, which will later be used to motivate the registration of other sites in the world.
On 17 October 2014 Matera was designated European Capital of Culture for 2019.

The stones of Matera and the rock churches

The oldest part of the city will leave you speechless: a group of caves, courtyards, underground tunnels and downhill alleys. The territory is divided into two areas: the Sasso Caveoso, where the cave houses have remained intact, the Sasso Barisano where you will find shops and craftsmen at work and the Civita the oldest part of Matera that stands on a hill that separates the Sasso Barisano from Sasso Caveoso. Access from different points to this area, one of the accesses is from Piazza Vittorio Veneto.

Particularly interesting are the Rock Churches that can be visited in the Sassi of Matera.
These places testify to the evolutionary passage of man from prehistoric times to Christianity.
The Rupestrian Churches are in fact in places of particular importance and in all probability were already places of worship in the rock civilizations that preceded the Christian one.

The most interesting and visited ones are:
Santa Maria de Idris – San Giovanni in Monterrone
The Church of Santa Maria De Idris is located within the rocky spur of Monterrone overlooking the Sasso Caveoso, near the Church of San Pietro Caveoso and the homonymous square. The location is beautiful and offers a unique view of the city and the Gravina.

Saint Lucia alle Malve
The rupestrian church of Santa Lucia alle Malve is located near the former S. Maria de Idris in the Malve district. It is the first female monastic settlement of the Benedictine order, dating back to the VIII century, and the most important in the history of Matera. Inside there are some of the most beautiful and important wall paintings in the Matera area.

San Pietro Barisano
It is located in the Sasso Barisano, originally called San Pietro de Veteribus, is the largest rock churches in the city of Matera. The archaeological investigations have made it possible to identify the first rock plant dating back to the 12th – 13th centuries, below the floor.

The old town of Matera is located on a plateau that borders the Sassi di Matera high up. Here too Matera shows different levels of overlapping urban strata. In fact, in the central square Piazza Vittorio Veneto there are some openings that show the original level of the places, today called hypogea, which are located below the same square. The hypogea are divided into continuity forming a real submerged city connected with the Sassi. Here there are exceptional rock structures such as the large cistern called Palombaro Lungo with walls 15 meters high and until recently navigable.

Tramontano Castle and the Cathedral of Matera

The Tramontano Castle was wanted by the Count of Matera Gian Carlo Tramontano in 1500, never finished because the Count was assassinated during a popular uprising. The Cathedral of Matera, which is located at the highest point of the city, was built in the thirteenth century in Romanesque style. Inside it is possible to admire the stone crib that was built in 1534 by Altobello Persio, the remains of San Giovanni in Matera and a Byzantine fresco of the Madonna della Bruna con Bambino.

The Cave House of Matera

There is no better way to try to understand the peasant world and the conditions of life in the Sassi before their forced abandonment than to visit the house – cave of Vico Solitario in Sasso Caveoso. The house, inhabited until 1957 by a family of 11 (more animals), consists of a single room, partly excavated and partly built, furnished with antique furniture and tools. There is the hearth with the kitchen, the bed with the mattress filled with corn leaves, the small table with a single dish in the middle from which everyone ate, the night pot used for bodily needs, the spinning frame, the area with the manger for the mule, the cavity in which the manure used to heat was collected, the cistern where the rainwater was channeled through a system of canals. 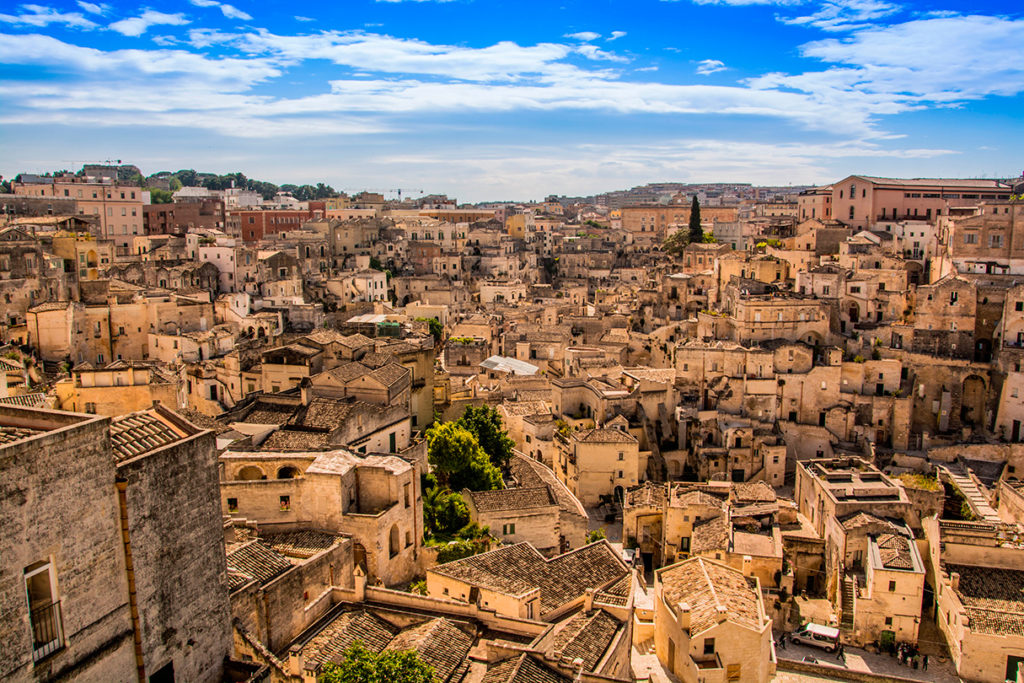 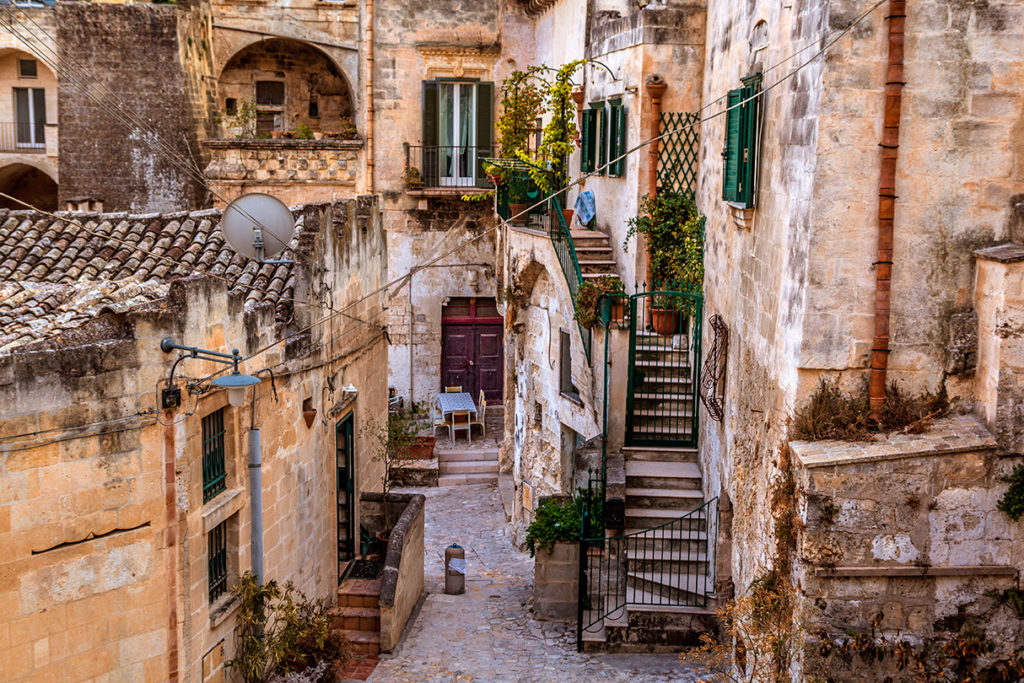