A port casket of a seafaring civilization, the houses of its historic center are a fishermen’s dwelling. Announced by the profile of the castle and the ancient walls, the beautiful Monopoli is reflected in the Adriatic sea.
Based on old seafaring traditions roots, this city has really old origins.

The first settlement was a huts village known also by Mycenean sailors, and founded during the Middle Bronze Age around a complex landing system that included also a deep inlet-port, sanded up by Normans in 1049. A messapian village was built on the proto-historic one and surrounded by huge perimeter walls in which Romans placed a monumental door that is now included into the XVTh century castle.

The village became very important during the whole Medieval period. According to the sea charts Monopoli harbour was so important as Bari and Brindisi too. It was conquered by Lombards and then it was subjected to the Byzantine power as well. In 1044 Normans conquered it. Since 1266, as many other villages around it was controlled by the Angevins.

One of the most glorious event of Monopoli history was the defeat of Marquis del Vasto, don Francesco ferrante D’Avalos, commanding officer of all the Spanish armies who after Florentia and Siena plunderings, he led a 5000 soldiers army who besieged the town for three useless months with an heavy gunfire which consequences are still evident on the wall in via Cadorna.

The historical center of Monopoli is a jewel of popular architecture mixed with sumptuous religious buildings and splendid palaces. It is Porta Vecchia, flanked by the city walls, to introduce in the old part of the city, lying on the Adriatic and dominated by the Castle. The heart of the old city is the baroque Cathedral of Santa Maria della Madia. Not far away, the nightlife is unleashed in the characteristic Piazza Garibaldi, where there are the Church of San Francesco d’Assisi and the Church of Santa Maria degli Amalfitani. Largo Palmieri is also worth a visit, with the homonymous palace and the Church of Santa Teresa.

Thereabouts, the town’s 99 “contrade” (districts) stretch out flatly, allowing you to admire them entirely with a single glance from the splendid belvedere of Loggia del Pilato. This natural terrace, on the road to Selva di Fasano, overlooks a countryside characterized by masserie (farmsteads), churches, rupestrian settlements, and villas.

Daughter of a rural culture that has always been alive and productive, the single-storey kitchen contains the best of the Apulian tradition. Delights of sea and land, for the eyes and for the most demanding palates, fresh fish, panzerotti, pancakes. All seasoned with the colors and the warmth of the many country and country festivals that mark the rhythms of the seasons. 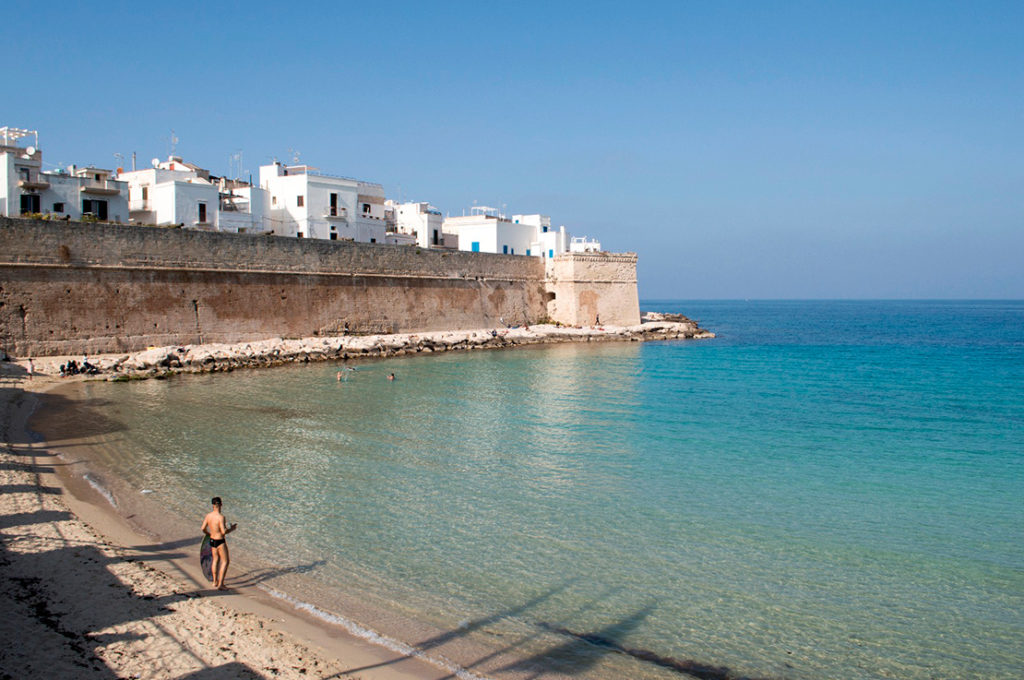 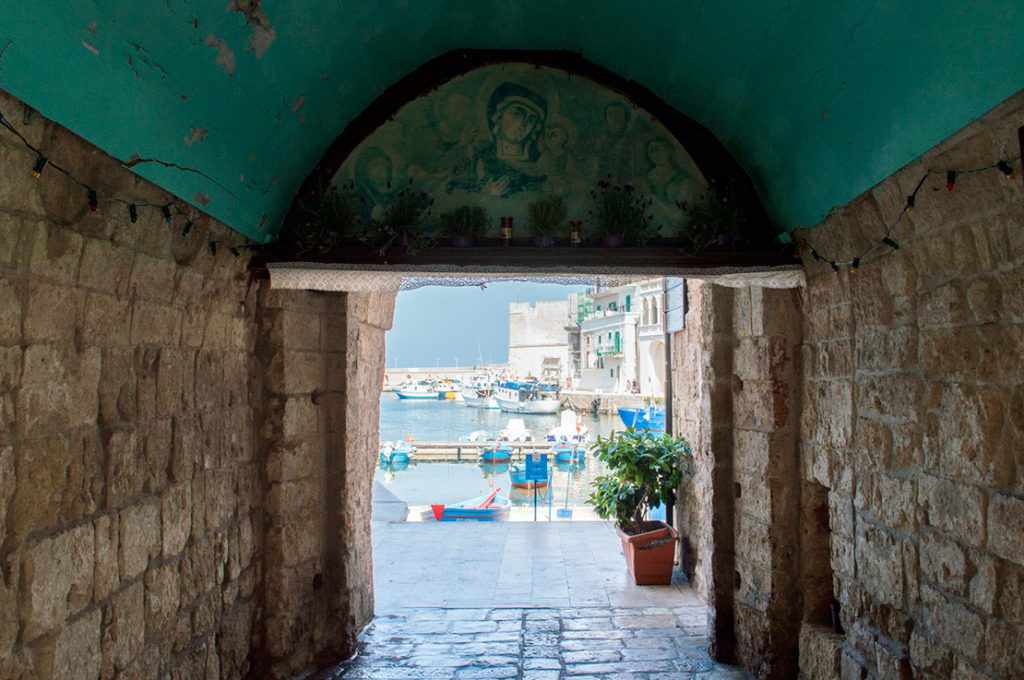 Dozens of sandy beaches characterize the coast of Monopoli for 13 km, including hidden coves, evocative ravines and gentle cliffs, awarded with the Blue Flag for cleaning the water and the services offered. Not to be missed, Cala di Torre Incina, dominated by the 16th century tower of the same name, and the Santo Stefano beach. The Capitolo beach is the kingdom of the young, with dance floors by the sea and delicious cocktails. There are numerous bathing establishments where you can practice windsurfing, beach volleyball, sailing and motor boating. The sea of Monopoli is also the placid one of the marina, with picturesque corners and expanses of moored goiters.

At the end of Via Cattedrale, it offers the visitor with its baroque curves, celebrating the Patron Saint of Monopoli. The monumental façade and the bell tower characterize the building that is protected, on the right, by a wall built to defend the churchyard from the wind, where some of the sixteenth-century statues in the previous Romanesque building have been relocated. The plan is a Latin cross with a double transept and three naves, where a dome is placed between the vaults and the transept, with the frescoes of the Four Evangelists. The Cappellone, the fulcrum of the entire building, which catches the eye right from the entrance. The altar is a triumph of colors thanks to the precious marble and the icon of the Madonna della Madia, with the blessing Child, surrounded by the sumptuous 18th century frame. According to legend, the icon of the virgin landed at the port of Monopoli, in the distant December of 1117, consecrating itself to the city and its fishermen. Since then, the devotion has never ceased and we continue to commemorate the miraculous event with the characteristic patronal feast, with a procession to the sea where the icon, placed on a raft, arrives, today as before, to the city port , escorted by fishermen.

Hewn out of a wide natural cave, the crypt of Santa Maria Amalfitana draws its name from the church built on its foundations in the 12th century by a group of noble families from the Amalfi Republic.
According to tradition, in fact, a group of sailors from Amalfi, survived a shipwreck near Monopoli, finding shelter in a cave already used by Brazilian monks as a holy place of worship. The church was therefore erected as a symbol of gratitude towards the Virgin for the grace bestowed upon them.

The crypt of Santa Cecilia is inserted in the territory of the Lama degli Ulivi botanical garden, and was probably commissioned by the Benedictine monks of Santo Stefano. Excavated in the calcarenitic stone, it has a single nave, originally provided with iconostasis and a continuous seat in the area reserved for the clergy. Along the walls are frescoes of the twelfth century depicting theories of saints, a deesis, the Annunciation and a Visitation, original because it is the only example in Puglia of a fresco with this subject in the cave.

Absolutely do not miss the opportunity to visit one of the many Fortified Masserie present in Monopoli, buildings that characterize the rural heritage of the city and which are a testimony of the relationship between men, agricultural work and production. These buildings are born because of the geographical conformation of Puglia, as a defense against the continuous invasions that came, generally, from the sea. They also became the center of agricultural and social life, where in addition to production and conservation, agricultural products were also transformed and commercialized. Among the most beautiful on the coast certainly the farms Spina Piccola and Spina Grande.